Posted on December 1, 2015 by alteregoliz 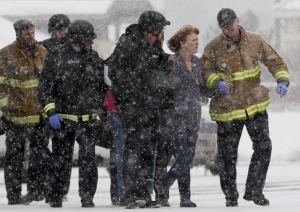 After months of verbal assault against Planned Parenthood and against women more broadly, Republican Christianists have gotten what they were asking for—bloodshed.

On November 27, a mass shooting left three dead and nine wounded at a Planned Parenthood clinic just miles from the headquarters of the Religious Right flagship, Focus on the Family. Was the shooting exactly what conservative Christian presidential candidates and members of congress wanted? Maybe, maybe not. But it is what they asked for. Republican members of the Religious Right incited violence as predictably as if they had issued a call for Christian abortion foes to take up arms. Inciting violence this way is called stochastic terrorism:

“Stochastic terrorism is the use of mass communications to incite random actors to carry out violent or terrorist acts that are statistically predictable but individually unpredictable. In short, remote-control murder by lone wolf.”

In an incident of…

This entry was posted in Uncategorized. Bookmark the permalink.